When Copiah-Lincoln Community College (Co-Lin) decided to rebuild two chemistry labs from the ground up, they turned to Sheldon Labs to make the transformation they imagined a functional reality.

The organic and inorganic chemistry labs at Co-Lin were housed in a building originally constructed in the 1960s. The planned renovation would see the third-floor labs stripped to the studs. Everything from the plumbing to the flooring to the furniture would be replaced, with the ultimate goal of enhancing student safety and creating more efficient, modern labs.

“Co-Lin’s growing enrollment over the decades had resulted in bottlenecks in the lab that weren’t a consideration when the spaces were originally designed more than four decades ago,” says Kevin McKone, Co-Lin’s science department chair. “When you put 25 freshmen who have never had a previous chemistry lab experience in one space, all carrying glassware and chemicals, safety and a good flow plan are critical.”

Key to developing the ideal plan for Co-Lin was the opportunity for members of the community college’s science faculty to tour other labs designed and equipped by Sheldon. Co-Lin representatives were able to incorporate the features they most admired in other Sheldon clients’ labs into their own plan, tweaking those features and equipment to create a custom environment designed specifically for the 2,000 students on Co-Lin’s Wesson, Mississippi, campus.

“Sheldon’s designers worked hand-in-hand with our chemistry teacher to fine-tune the plan. They came to campus several times to measure, re-measure, and adjust the drawings until our custom plan was finalized,” McKone says. “They were responsive to our every request.”

“Sheldon’s installers are incredible,” McKone says. “As far as the crew doing exactly what needed to be done and doing it professionally, they were outstanding.”

“I would have no hesitation at all in recommending Sheldon Labs,” McKone says. “They work closely with you, the final price is what was quoted, and the deadlines are met. Sheldon was an excellent partner for Copiah-Lincoln Community College.” 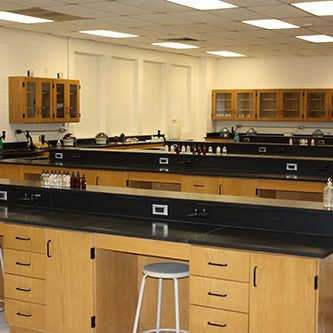